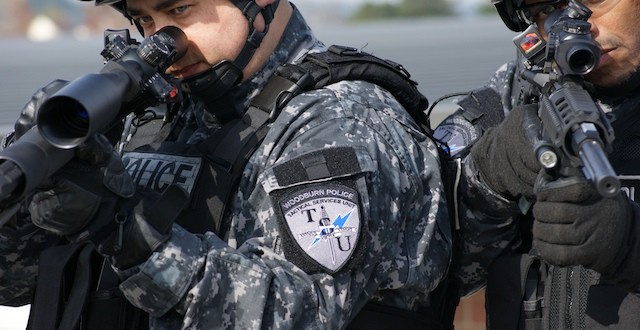 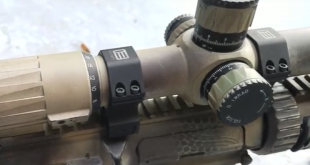 Some Sort of VUDU

High Powered optics, low powered optics, red dots, reflex sites and iron sites. That is a lot of choices when it comes to what you use to aim your AR-15. Add to that the when the AR-15 was developed it was designed for a fixed iron site. While the transition from the M16A1 to the more modern M16A4 has included the inclusion of the Picatinny rail the size of a traditional upper receiver flat top did not truly allow for high powered optics.

The creation of the cantilever mount however has changed this moving the optic forward by 1.75 inches. The forward movement provided by the cantilever mount has allowed the shooter to position their head in the proper position whether upright or prone and not sacrifice their shooting position due to improper optic positioning.

However with many long range shooters moving to these cantilever mounted higher powered optics a new problem is created. How do you transition to a closer target? Are you now forced to choose between a dedicated long range rifle and a Close Quarters Combat weapon with a dedicated red dot or iron site? If shooting an AR-10 in a hunting environment what do you do for the sub 50 yard shots?

Due to these issues there has been a rise in the 45 degree offset mounts. These mounts are designed to allow you to mount a small red dot, reflex or BUIS along side your optic. With a slight rotation of the gun to left (in most cases) you can easily transition to a close quarters situation. The addition of the 45 degree mount is not brand new but the way the Warne is doing it on the RAMP mount is.

Here are some examples of the most common ways we find 45 degree mounts connected:

You will notice that the red dot is placed forward of the primary optic. This causes a rather drastic optic focal transition for your eye when switching between the 2 sites. Further if given the choice I have never seen a red dot mounted that far forward when used as a primary optic. The reason is the sight picture is not optimal at that distance. Having a way to mount the red dot or reflex optic in a more natural position much closer to the rear of the gun would be better then what you see here.

Well other much smarter and skilled people then me came to the same conclusion. As such we have seen another form of mounting solution that would attach your reflex sight directly to the optic at a much better distance for viewing.

You can see one such example above. The problem here becomes now you are looking up and over your primary optic. This puts the secondary optic much higher on the gun and up and away from the barrel. While I find the placement better than the first option it is still not ideal.

Warn solved this problem by integrating the 45 degree secondary mount directly onto the base of the primary rings. The benefits are obvious from your first time shooting it. Having the sight placement at the rear of the gun and low to flat top of the AR the sight is easy to transition to and from as well as allowing for a long site radius when using BUIS.

The base is built with 45 degree offsets on both sides. This allows for either BUIS on one side and a red dot on the other (overkill IMHO) or the more likely use of working equally well for lefties or righties. When sharing a patrol rifle in a LEO situation this is beneficial. For those of you concerned about any extra weight you can remove either independently.

In our testing we found that the base accepts even larger red dot sights like the cheap BARSKA or the big Aimpoint PRO. It really shines however when being used with smaller solutions like BUIS or reflex sights.

To facilitate the use of an BUIs they have created a very small 45 degree mount to be mounted on your forward rail or gas block.

Warne has expanded its line with the addition of several colors including the Zombie series. I am not sure who exactly determined the bright green was the official color of the zombie apocalypse but to each their own.

The rings come in various sizes to accommodate all the most popular high powered scopes such as 1 inch 30mm and the new 34mm mounts.

We hope to have some photos up of using these at the range. While we were able to test them and found they hold zero without an issue on the AR platform we were unable to photograph or video the trip.  It is getting cold enough outside that my camera man is being a baby about it :P

In our book this is one of the best mounts we have shot. I have replaced this is my primary mount on my long range AR and it will be used for my new 6.5 build that is in the works. I am very interested to see how it takes the beating from that gun.

You can find more about them here: http://warnescopemounts.com/

Charles is the editor and lead writer for 248 Shooter, a Michigan based gun, news and gear review site. An avid student, taking classes from top tier trainers around the country. Charles is not LEO, Military or Invested in the companies he reviews. The goal of all articles is to show an gun fan enthusiasts opinions on popular products in the market. The opinions expressed are individual opinions that we hope you enjoy reading and offer a unique user perspective that may be of assistance. Charles shares his love for training as well as experience and opinions on some of the most talked about gear and products used by competitive shooters, military, leo and civilians. Ever a supporter of the Michigan economy, the hunting sports and the 2nd amendment.
@248Shooter
Previous US Night Vision Mag Wraps
Next Roger’s Custom Kydex Holsters Appendix Carry 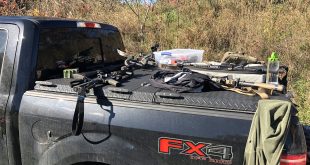 Fall is a perfect season to train. Why? Heat. Warm enough to be comfortable while …