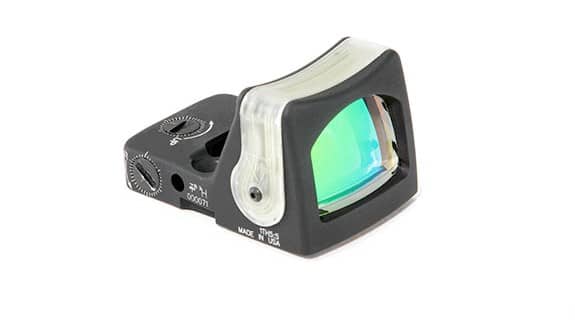 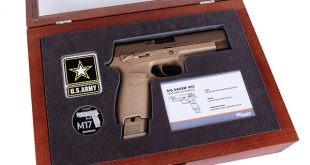 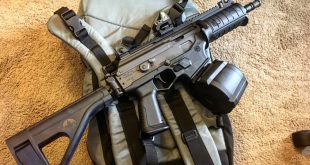 Recently we had the chance to review the RMR08G from Trijicon. There is no question that Trijicon is considered one of the top manufacturers of optics, fiber optics, and Tritium night sights.

This time around we spent some time with the matte black RM08G Dual-Illuminated RMR Reflex Sight. Housed in rugged forged aluminum, the RMR is extremely tough yet lightweight. It has new easy-to-use adjusters with audible clicks allow for quick windage and elevation adjustments. The new RMR08G Trijicon is tougher than any alternative and is suitable for military, law enforcement, responsible civilians and hunting applications.

What separates this RMR from the standard Trijicon line up includes:

We wanted to put it to use on the most typical places to find a RMR like this. This is a defense style RMR designed for hard use in no light to low light when seconds count and you don’t want to be fiddling with batteries. So we focused our tests on a handgun as well as 2 popular shotguns. While this will certainly work with almost any gun we felt these would be the best representation of real world use.

Some quick highlights on features:

Mounted on a Glock

I started testing with a Glock 17 and mounted the Trijicon RMR08 directly on the slide. Prior to the class I had scheduled for running the RMR I had been drawing and dry firing, practicing acquiring a target as quickly as possible, correctly and safely.

Arriving early for class I began zeroing the RMR in at 5 yards, and then out to 20 yards. After only four shots I was on zero at 20 yards. I ran quite a few different drills with this and no matter what I tried the target acquisition was great. We even tested the pistol in the water and had no issues, because it is good down to 65”, which is far deeper than I plan on going with a gun.

I shot 200 rounds of Detroit Bullet Works 9mm 124 grain HP and I can say that I had a better-hit % then when using the Trijicon HD sights on my G19. Acquiring the target was a bit slower at first if I did not carefully focus on the basics to get the right sight picture down. From the start though I was delivering rounds on target, accurately, while moving and shooting from multiple distances.  In Particular longer shots were a lot easier and more accurate than with iron sights. I was able to hit 6”steel at 100 yards that is remarkable considering we are dealing with a close range weapon system.

When shooting at closer ranges like 5-7 yards I found the added height of the RMR required me to pay extra attention to fundamentals such as hold over. Target acquisition was easier but my shots would be off initially due to not accounting for the positioning of the RMR. With time and training this got easier and more natural.

At longer distances the bright triangle and fast acquisition made for much easier shots. Not being as young as I used to be, my eyes have more trouble picking up even the night sites on my Glock. This super bright RMR was easy to see and made the longer shots easier than before.

I had to customize my G-Code Incog to accept the G17 with the RMR on it some, but it was well worth it. If you are adding this to an existing weapon system you may need to keep that in mind. Also note that many major manufacturers of holsters offer customizations to allow for an RMR mounted on the slide.

Once darkness arrived we checked to see what the moon illumination was on June 12,2014 it was at 98.6%. This is an almost full moon that generated a lot of additional light. With having the dual-illumination on the RMR, The green triangle was really working well. While the backup batteries in some RMR’s would be required at night with just moonlight we found that the Trijicon RMR worked like a champ without any form of backup power.

Mounted on a Shotgun

Next we took the American Defense AD-RMR Mini Quick release Right Handed mount, Trijicon RMR08G and put them on a Remington 870 Tactical full custom shotgun. This was even more fun to shoot than the Glock was! After moving the RMR a few times to get the correct position on the top rail, I Sighted it in at 25 yards and was on my target in two shots.

When shooting from the ready position and coming up, the target was easy to acquire compared to using the HD iron sights. Most tactical situations are at close range, but even going out to 50 yards was quite fun. The thing I liked about running the -12.9 MOA green triangle reticle instead of the normal red dot RMR is I could see the tip of the triangle easier on the target.

We ended up shooting 100 rounds through the Remington, under different conditions and in all cases the RMR performed as expected. Shooting the gun at the brightest point of the day did not washout the triangle reticle, but due to the ambient lights it obviously did not stand out as much as it does at night. Trijicon has done an excellent job of balancing the use of artificial illumination and the use of ambient light to put together an RMR that brings you a versatile tool that will perform in a variety of situations.

We moved on to testing the Remington 870 at night, we waited for a new moon to get the best low light simulation we could this took a few days until June 26, 2014 when the moon was illuminated at 0.5% testing was completed at 10 and 20 yards in the near darkness.

From the ready position the acquisition of the triangle shaped reticle was intuitive and quick. It took several shots to get used to the cheek weld adjustment needed for the higher site picture and after getting used to that, the triangular reticle becomes a natural point that draws your eye. Running a 2-2-2 drill at 10 yards using double 00 buck (after the initial adjustment period) I ran some of my fastest times ever.

Mounted on a Keltech KSG

Next we took the American Defense AD-RMR Mini Quick release Right Handed mount, Trijicon RMR08G and placed it on a Keltech KSG. After making the necessaryadjustments, I was on target in three shots, even with this being the first time running the KSG  (review on that coming soon, so stay tuned!). With all the negative talk out there about the KSG, we were anxious to review one and I couldn’t wait to run the Trijicon RMR08G on the KSG. First off was some 7 yard 2,2 4,2, 2 shots with 2 3/4” loads. Next we up the ante to some Federal LEO 3” OO tactical loads, and I have to say that when your run 100 3” loads you are going to get a great idea of what the weapon system is capable of! You will also get a purple shoulder, and sore joints! I have to remember I am not as young as I use to be!

I took the RMR off the KSG and ran without it, within a few shots it was clear to me that my sight alignment and target acquisition was better with the RMR. With the RMR on 2 shots @ 10 yards were 1.5 and with out the RMR I was at 1,9, the bright triangular reticle just seems to make target acquisition and transition so much more intuitive. This was all tested during the night with almost no moon.

I normally like to add a pro’s and cons section to all of my articles and since I have yet to review the perfect product. Because I have discussed so many different points in this article covering multiple weapon systems and situations I am going to simply discuss the one issue I found with the Trijicon RMR08G.

This RMR has no batteries and relies on no external power source. It either amplifies the light or uses a Tritium power source to illuminate the optic and create the targeting triangle. In broad daylight and at night it does its job masterfully. However during dusk this optic really struggles. I am not sure if it the amount of ambient light being more than the tritium can overcome or what, but the triangular reticle is too faint to see. During a few scenarios it didn’t even show up at all. For this reason we would highly recommend using the RMR in conjunction with iron sights as well as upgrading to suppressor height sights to ensure seeing the posts above the RMR base.

This is a great product out of the box, needing only one or two shots to get on target. The RM08 Dual-Illuminated RMR Reflex Sight from Trijicon is rugged, took all of the punishment during multiple range trips (we didn’t baby it). If you look at my gear it is scratched and used I was never one to focus on the finish and baby my gear. The weapons were in the dirt many times. No we didn’t throw it or beat on it, I’m sure that’s already done by Trijicon. Even with multiple mounting on the different platforms the reticle held up and was holding zero.

The use of advanced technology that eliminates the need for batteries is a great idea and Trijicon has executed it superbly. For a home defense gun such as a pistol or shotgun, the issues related to dusk are likely not a problem and make this RMR a strong contender. For an EDC solution on a pistol I would personally go with one of the battery assisted RMR’s or at the least put suppressor height iron sights on my weapon. I would also consider adding this as a backup sight on my AR-15 pistol for when I forget to replace the batteries in my red dot.

You can buy direct from Trijicon here: https://www.trijicon.com/na_en/index.php

Charles is the editor and lead writer for 248 Shooter, a Michigan based gun, news and gear review site. An avid student, taking classes from top tier trainers around the country. Charles is not LEO, Military or Invested in the companies he reviews. The goal of all articles is to show an gun fan enthusiasts opinions on popular products in the market. The opinions expressed are individual opinions that we hope you enjoy reading and offer a unique user perspective that may be of assistance. Charles shares his love for training as well as experience and opinions on some of the most talked about gear and products used by competitive shooters, military, leo and civilians. Ever a supporter of the Michigan economy, the hunting sports and the 2nd amendment.
@248Shooter
Previous Bad Choices Lead to Conviction in Detroit Porch Killing
Next Michigan Senate Passes Citizen Initiative for Scientific Wildlife Conservation