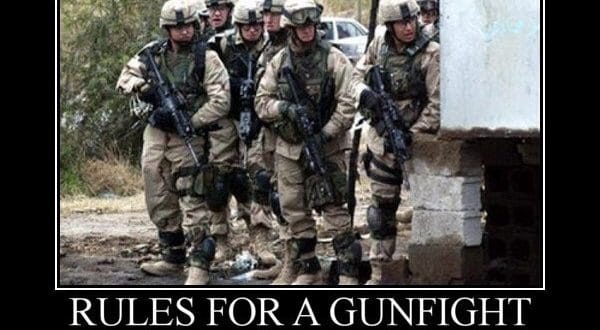 Sunday Sermon: Bring a Gun. Bring Two Guns. Bring All Your Friends Who Have Guns

How do you think about self defense?

Do you carry a sidearm and just content yourself that should the vague ‘something’ occur you and you alone will respond, gain fire superiority, and vanquish your foes by fire and fury? The thought that upon your timely and perfectly executed engagement the enemy will flee or fall is a wonderful fantasy.

Reality will require a much more active approach with a complex set of unknown variables. ‘Something’ is an enormously complex variable. To simplify that variable and stack odds in your favor consider the following.

Duh, you say, but seriously carry a gun every moment you can. Make it as much a habit as grabbing your phone, keys, wallet, etc. If you’re in poor practice at grabbing those be best at bringing your gun.

If your first gun does not work you have a second. If one was left in the car the other is still on your person. If you need to arm somebody and double your coverage you can. Two is one, one is none. There are a number of advantages to carrying double and the disadvantages are limited, mostly paralleling the excuses for not carrying even one gun in the first place.

Bring All Your Friends Who Have Guns.

Tongue in cheek aside if you routinely travel with other people you are less likely to be a target for violence to begin with. If the people you travel with are also armed, practiced, and even moderately proficient at the basics of gunfighting (like drawing and actually hitting the threat while not hitting non threats) a group has greater advantages than even a well practiced individual in the event of violence.

Think ahead, keep up proficiency, and foster good habits.

Keith is the Editor-in-Chief of GAT Marketing editor@gatdaily.com A USMC Infantry Veteran and Small Arms and Artillery Technician, Keith covers the evolving training and technology from across the shooting industry. A Certified Instructor since 2009 he has taught concealed weapons courses in the West Michigan area in the years since and continues to pursue training and teaching opportunities as they arise.
Previous Review: Streamlight’s PROTAC RAIL MOUNT HL-X LONG GUN LIGHT
Next Meopta Introduces the MeoMag 3x Magnifier for Red Dot Sights