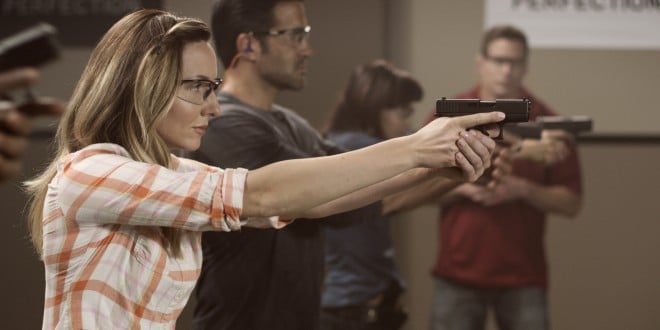 Amanda Furrer is an Olympic shooter featured in the recent GLOCK commercial. She didn't write our review but since Janice didn't want to be shown on camera this photo will need to serve. Thank you Amanda Fuller and GLOCK for use of the image.

What MCRGO says about it:

The bill will create an exemption to concealed carry pistol free zones in MCL 28.425o. Any CPL holder can qualify for the exemption upon request with no additional training. New and renewal applicants will not be charged any additional fee. Clerks can charge current CPL holders up to $20 for a replacement CPL with the exemption box checked.

The bill would prohibit a person from intentionally displaying (open carrying) a firearm on the premises of a pistol free zone in MCL 28.425o unless the person is the owner or employee of the premises or has the express written consent of the owner. This is the “concealed means concealed” clause with an exemption for express consent on private property. We feel the language in the bill is sufficient to protect people printing or accidentally exposing their firearms.

Private property owners can continue to prevent all forms of carry under Michigan trespass law. Public property will continue to be preempted by state firearms law, meaning that concealed carry with the exemption cannot be prohibited on public pistol free zones in MCL 28.425o.

We expect the bill to be referred to Senate Judiciary Committee next week on July 15. Sen. Green has stated that Gov. Snyder has indicated he will sign the bill. MCRGO supports the legislation as it will result in far more of Michigan’s nearly 500,000 concealed pistol license holders carrying in concealed pistol free zones. We anticipate this will ultimately result in the elimination of pistol free zones altogether. It will also be a huge boost to public safety as it will result in more gun owners carrying legally in more places.

In short reading the bill and looking at related forum posts here is what I gather it will do in short.

We will continue to watch this closely to ensure that preemption is not removed from this bill as well as make sure that the concealed means concealed clauses do not open up gun owners to unfair attacks for printing and such.

I have spoken to a member of the Open Carry movement and hope to have him share his opinion on the proposed legislature and reasoning behind them.

In the meantime there is a few issues that have been brought up that stick out to me.

The need to make this an additional exemption as opposed to a basic function of the CPL makes no sense especially if there is no training requirement. Likely it is a horse trade to show anti’s that the person received a state issued exemption, but it’s UN-needed.

It was also made clear to me that the protection from brandishing or accidental exposure may not be as solid as claimed. We will certainly need to see further drafts of this legislation and would like to see what the state is considering open carry. Who draws the line on concealed means concealed? Does this give cities like Ann Arbor the ability to make legal carry difficult on gun owners?

More people carrying is a good thing and no legislation is perfect. It is my hope we as gun owners can discuss this without name calling or attacks and do what is best. This legislature like any legislature has negative and positives and we encourage you all to review it for yourself to make an informed decision. We have closed comments on all posts on this blog but encourage you to discuss this issue on our Facebook page https://www.facebook.com/248Shooter

MOC opposes SB 422 on more than just a ideological level. Obviously we oppose trading open carry for other things, but our opposition goes beyond that. In summary, this bill is a sloppy mess.
Why have an exemption if everyone can get it upon request? Why make people spend the extra time and money if no training or checking is involved. To us it screams of a mechanism to add extra training. Something we know Senator Green has supported in the past.
How about the enforcement mechanism? SB 442 would take something that is currently lawful and make it punishable with a $500 fine and a 6 month license suspension, then eventually all the way up to a 4 year felony. 4 years in prison and the extermination of the right to even possess a gun just for doing something that has been legal since the founding of the state. All without even the intent of doing something wrong.
It has been stated that there is protection for accidental exposure and “printing”. We disagree. The bill reads “shall not intentionally display or openly carry…”. Having just gotten a bill passed where the placement of the word intentionally was very critical, we firmly believe that language to be very dangerous. Remember, it punishes intentional display OR open carry. Not intentionally display OR intentional open carry. Open carriers know that anti-gun prosecutors will use anything they can. (Note: MCRGO is now commenting that they would like better language too)
There is a ton more, but the last thing I will mention is that SB 442 makes it so the acquisition of a CPL would take away a previously ability. Making this change in 28.425o is absurd because it doesn’t match up with other statues. For example, without a CPL, I would be able to OC in an entertainment facility with a seating capacity of 2500+. However, once I obtain a CPL, then I would lose the ability to OC and would only be allowed to CC. The net effect is an actual loss of rights by obtaining a license. I don’t even want to think about how an officer would enforce this. Establishing RAS to detain and investigate someone would be a mine field.
There is a better way forward than this. Even if we wanted to “swap” there is still a better way to go about that. This has to be the worst way conceivable.
How about we just let the gun groups do what they are here to do. The momentum is in our favor and now is not the time to strike.

As mentioned above by us, again by Tom and now by MCRGO the need to make an exemption to the license offers little to no sense unless it is just a place holder for further training requirements like in SB59.
Tom asserts that enforcement changes from a trespassing statue to a CPL infraction with upto 4 year felony and 4 years in prison on the third offense is a bit of a stretch. The penalty is related to concealed carry not open carry,it is consistent with illegally carrying a firearm with a license already in PFZ’s. So yes open carriers would need to abide by concealed carry rules but concealed carriers can expand where they carry legally without penalty. This is the trade that has been talked about and this change is in line with that trade.
The strongest point in his argument IMHO is related to what protections are being offered for printing and accidental display of a firearm. Tom’s concern does appear to be founded and this is something we need to watch.
As for Tom’s last point on SB 422 in relation to taking rights away once you gain a CPL is an interesting and dangerous one, it will likely be the source of a future post.
We want to Thank Tom and MOC for sending us this response and for the work they do in the community. Please check back with 248Shooter.com over the coming days as more information is made public and as we talk further with the Michigan Gun groups fighting for and against this legislation.
Added 11:23 am 7/10/15
LEGISLATIVE UPDATE: Governor Snyder has told MIRS Legislative News that he opposes allowing concealed carry in schools, even if open carry is banned. Sen. Majority Leader Arlan Meekhof has indicated that he’s the first co-sponsor on SB 442 and it appears some form of the bill (revisions pending a meeting between Green, MCRGO & NRA-ILA next week) will have more than enough votes to pass the Senate. Asked why he would push legislation that could face another veto from the Governor, the Senator said “that’s the Governor’s problem.”

LEGISLATIVE UPDATE: After meeting with the Senate yesterday, changes are being made to SB 442 (general exemption for pistol free zones):http://mcrgo.org/doc/sb0442.pdf

The main change is that all of subsection (9) will be eliminated and subsection (8) amended on page 37. This will eliminate the “shall not intentionally display or openly carry a pistol” language that would have created a ban on open carry in concealed pistol free zones in MCL 28.425o. Consequently, there will be no outright statutory ban on open carry.

Instead, a second Senate bill will be introduced to amend MCL 750.234d (general weapons free zones) and MCL 750.237a (schools) to require that carry with a concealed pistol license in those zones be concealed. This will close the exemption in those sections that has been referred to in the past as a loophole. The general exemption language in SB 442 for concealed pistol free zones in MCL 28.425o will remain. Owners of privately owned pistol free zones can continue to allow open carry.

The other change will we see to SB 442 are automatic exemptions put in place for people upon renewing their license who have requested and were granted an exemption. People will still be required to request the exemption once. MCRGO will engage in an ongoing educational campaign to let CPL holders know a general exemption exists once the bills become law.

Sen. Green has already done extensive outreach to various stakeholders including sheriffs and prosecutors on SB 442 and we expect easy passage in the Senate. It’s possible that similar, but not identical, legislation is expected to be introduced in the House and the House & Senate will work out the differences between their legislation once they pass in their respective chambers.

We will not likely see a position on the bills from Gov. Snyder until the enrolled bills reach his desk and he’s put in a position to either sign them into law or veto them. The legislature will move forward with addressing pistol free zones regardless of a commitment that Snyder will sign them.

We will provide more specific details once the other bills are introduced. None of the bills will compromise preemption and we do not expect to see any additional training required.

The goal of this legislation continues to be a result that will greatly expand the number of concealed pistol license holders regularly carrying concealed in pistol free zones. It is a halfway step toward the eventual elimination of pistol free zones. The halfway step, rather than full repeal, is necessary if the bills are to have any chance of being signed by the current governor.

Charles is the editor and lead writer for 248 Shooter, a Michigan based gun, news and gear review site. An avid student, taking classes from top tier trainers around the country. Charles is not LEO, Military or Invested in the companies he reviews. The goal of all articles is to show an gun fan enthusiasts opinions on popular products in the market. The opinions expressed are individual opinions that we hope you enjoy reading and offer a unique user perspective that may be of assistance. Charles shares his love for training as well as experience and opinions on some of the most talked about gear and products used by competitive shooters, military, leo and civilians. Ever a supporter of the Michigan economy, the hunting sports and the 2nd amendment.
@248Shooter
Previous Tennis Anyone? The Covert Rackit-36
Next Magpul GLOCK Mags the GL9 Review