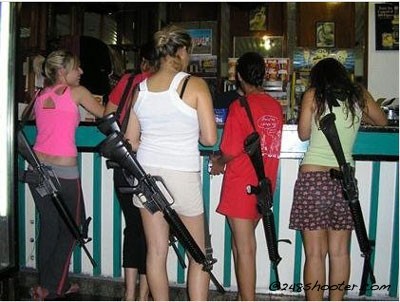 The NRA through the NRA-ILA has published a very in-depth request for both the gov’t and the people to take a step back and think. To use their own word “because something can be done doesn’t mean it should be done”. You can read it here: ARTICLE

It reminds me of a saying my father used to share with me as a child. You never want to be dead right. Just because a driver has the right of way or a biker has the law on his side when making a maneuver does not ensure the safety of said action. If doing the right or legal thing gets you killed it was not the right thing to do.

To save the semantics argument I am referring to legal right here, not a moral right. Risking your life to save a person at the cost of your own is the epitome of doing what is right but that is not what I’m talking about.

The NRA ILA goes on to cite 2 very controversial topics as its example of “Good Citizens and Good Neighbors: The Gun Owners’ Role”.

Growing up on the east coast I have seen first hand the damage caused by horrible legislation. Smart guns are a prime example of how an untested idea pushed by legislation is a recipe for disaster. Just because the technology may exist (be it in a very early stage) does not mean that it would be right to push this technology on legal abiding gun owners.

This first series of the article is likely nothing out of the ordinary for those of us who read the regular press releases from the NRA or its appended bodies. The second series however is a drastic departure from their typical releases.

Encouraging law abiding gun owners especially in the state of Texas to stop the practice of open carry is not something you would expect out of a gun lobbies mouth. I applaud them for both approaching the subject and the manner in which they have done it.

I own many long guns and as you can tell from the site, we take the second amendment very seriously as well as the first. The right to protected free speech, the ability to congregate and a population’s willingness to stand up for what is right is part of what makes (or made depending on your point of view) us a great country.

Like many people we are believers in the right to own and carry a gun without gov’t intervention. Open carry should be legal in all states IMHO. The fact that it isn’t is something that needs to be pushed for and worked at. Shoving long guns in the face of every day citizens who have been brain washed through the liberal education system, then poisoned with television is not the way to make them feel good about gun owners as responsible stable citizens that can do more good than harm.

While long guns in local stores gets attention it is the wrong attention. While it maybe legally right and the people who are involved are doing it for the right reasons the result is they are killing the argument by being dead right.

If the true intention is to draw attention to bad gun laws cast upon good people we need to due a few things.

Open carry of a handgun is a logical place to start. In most places it is legal and since we are a Michigan based blog and it is legal here that is a great place for us to start. Handguns are scary enough to many people, but far more common place than an AR/AK or SCAR. Handguns are also a more realistic representation of what an average person will use to deter crime in a local suburb or city.

By winning people over and not trying to shove a foreign belief system down their throat we stand a chance at making a difference. I applaud the NRA for commenting on something that is likely going to anger a few gun owners. Now is the time to stand united, focus on the fight and act in a manor that leaves us without reproach.

Charles is the editor and lead writer for 248 Shooter, a Michigan based gun, news and gear review site. An avid student, taking classes from top tier trainers around the country. Charles is not LEO, Military or Invested in the companies he reviews. The goal of all articles is to show an gun fan enthusiasts opinions on popular products in the market. The opinions expressed are individual opinions that we hope you enjoy reading and offer a unique user perspective that may be of assistance. Charles shares his love for training as well as experience and opinions on some of the most talked about gear and products used by competitive shooters, military, leo and civilians. Ever a supporter of the Michigan economy, the hunting sports and the 2nd amendment.
@248Shooter
Previous Limited Time P-Mags Promotion
Next 2 Days and 2 Nights With Travis Haley