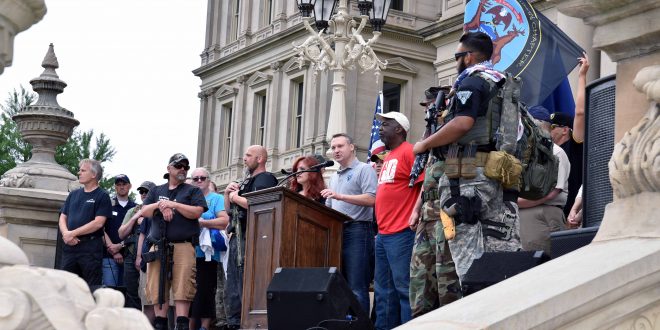 This years Second Amendment March was the largest one yet.  Roughly 400-500 firearms enthusiasts gathered right on the front lawn and steps of the Michigan State Capital building. Most of the attendees proudly open carried everything from relics and handguns to rifles and shotguns making the capital building the safest place in the state of Michigan at the time.

Walking from the parking garage to the capital building with a group of 10 other people, most of which had never met before, we encountered local residents who all seemed very supportive and comfortable having 11 people with I believe 17 guns between us walking through their town.  The march was full of second amendment supporters from all walks of life, age groups, and races. On my way to the march I prepared myself for hateful protesters but to my surprise, I did not encounter a single one. 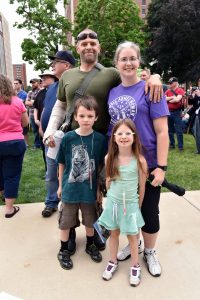 Upon arriving on the lawn of the Capitol building I immediately checked out the vendor tent. I found a wide variety of local companies selling merchandise and handing out information.  Michigan Open Carry and Michigan Gun Owners were definitely making a very big statement inside the tent as well. This was a very well-organized event with a great lineup of speakers. Joel Fulton with Freedom Firearms was this year’s host and did a wonderful job pumping up the crowd and keeping the special guest speakers on schedule.

The event kicked off in true American fashion with the playing of the National Anthem.  A crowd of hundreds of legally armed citizens standing proud and tall to honor our country is one hell of a sight by the way. Skip Coryell, the Founder of the second amendment march, spoke about the importance of the second amendment, why he started the march, and how far it has come since starting it. As the speeches went on I noticed the crowd was getting much thicker.

I honestly couldn’t stop checking out everyone’s guns.  It became kind of a game for me. It was incredible.  About an hour into the speeches Tom Lambert, President of Michigan Open Carry stepped up to the platform. To start his speech, he asked that anyone involved with a firearms company or contributor to the second amendment march please come to join him on the steps.  It was a very powerful moment as the steps filled up with these men and woman.  Tom delivered a very patriotic and heartfelt speech.  Asking for all gun owners to join together in an effort to educate those who oppose the second amendment and guns in general. 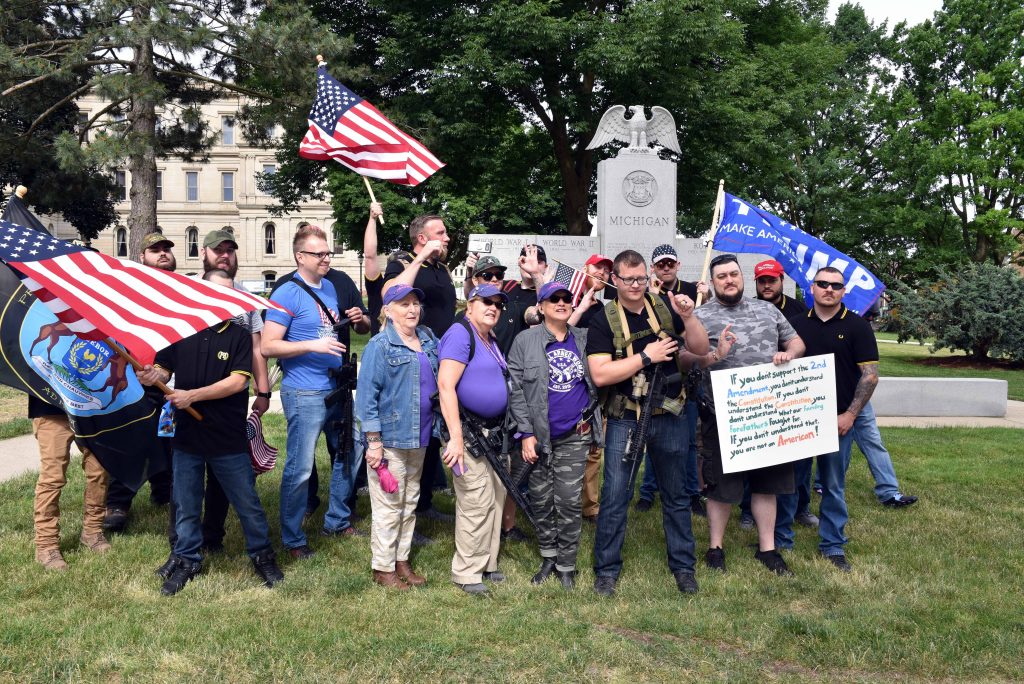 Tom was followed up by social media personality and police officer Mike the Cop.  Mike added some humor into the mix by making everyone turn to the person next to them and repeat after him, “my gun, is better than yours.” No fights broke out and everyone got a good chuckle. Mike gave a different perspective on gun rights and guns in general.  He wore a shirt that stated, “I will not infringe.” He spoke of not infringing on any citizens rights and if he was ever told he had to go confiscate anyone’s guns he would turn in his badge and quit.

Mike was followed by Madison Rising, the most patriotic band in the country.  Madison Rising is a hard-hitting rock band from New York. The band is led by Air Force Veteran Rio Hiett with support from Samuel Fishman, AJ Larsen, and Tom DiPietro. Madison Rising rocked the capitol for a little over an hour.  Followed by the firearm law Panel of Dean Greenblatt, Terry Johnson, and Jim Makowski.  The law panel answered legal questions from the crowd. 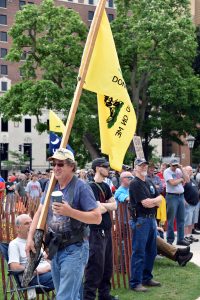 The day was starting to wind down and you could feel the crowd was beginning to fizzle out. It was definitely time to wrap up the march.  To close out the day, Rob Cortis, owner of The Trump Unity Bridge got the crowd to head over to his 50 ft long, over 13 feet tall, and approximately 9,000-pound motorcycle trailer converted into a President Trump tribute. It features American flags, signage including six-foot-tall letters spelling “Trump”, a carved wooden eagle, and a replica of the Statue of Liberty.

The now smaller but still heavily armed crowd gathered around the Trump Unity Bridge to recite the Pledge of Allegiance and sing the National Anthem together.  The crowd was then organized by Phil Robinson from the Michigan Liberty Militia for a March around the capitol building.  The day went perfectly without one single hitch.  No one got shot. No guns attacked anyone. And not one anti-gunner showed up to try and cause issues. It really was great to see so many second amendment supporters show up on a rainy day to come together in our fight to protect the second amendment.

Andy is a content creator and photographer for Athlon Outdoors. A certified NRA Instructor since 2008, he has taught concealed weapons courses and firearms safety courses in Michigan. Through photography and writing, Andy tests and reviews the latest guns and gear with the goal to bring an unbiased opinion to the reader on some of the industry’s most popular products. You can find more of his work at detailedimagesphotography.com or follow him on Instagram @detailedimages
Previous We Remember
Next Sunday Sermon: The Sound of Silence