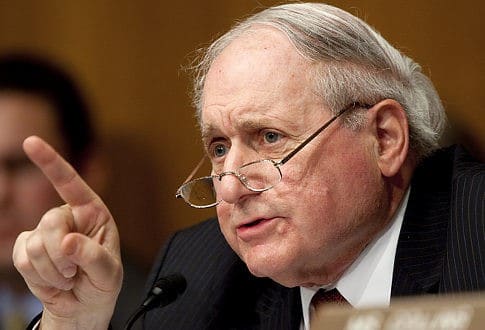 Senator Levin is doing everything in his power to remove your 2nd amendment rights.

The Statement of Purpose from the Bill reads:

“To uphold Second Amendment rights and prevent the United States from entering into the United Nations Arms Trade Treaty.” The U.N. Small Arms Treaty, which has been championed by the Obama Administration, Would have effectively placed a global ban on the import and export of small firearms. The ban would have affected all private gun owners in the U.S. And had language that would have implemented an international gun registry on all private guns and ammo. Astonishingly, 46 out of our 100 United States Senators were willing to give away our Constitutional rights to a foreign power.
Here are the 46 senators who voted to give your rights to the U.N.

How did your Michigan representatives vote?

Both voted against the bill and against your rights.

These Senators also voted against your rights:

Is it any shock to those of us who follow politics that these elected officials care nothing for the rights of the people they represent? Is it shocking that they ignore emails and phone calls from constituents and instead empower party politics and fight to weaken our individual rights while growing large government?

No it is not shocking at all. The only thing that is shocking to me is these detestable enemies of the people are  voted back in to power. We need to get out and vote, raise awareness and tap into the growing base of new gun owners. This new group of gun owners may never have voted before based on gun laws but now is the time to press these issues.

This is our state and our country and we must speak up enough and vote with the power to show party politicians that their antics will not last any longer.

Charles is the editor and lead writer for 248 Shooter, a Michigan based gun, news and gear review site. An avid student, taking classes from top tier trainers around the country. Charles is not LEO, Military or Invested in the companies he reviews. The goal of all articles is to show an gun fan enthusiasts opinions on popular products in the market. The opinions expressed are individual opinions that we hope you enjoy reading and offer a unique user perspective that may be of assistance. Charles shares his love for training as well as experience and opinions on some of the most talked about gear and products used by competitive shooters, military, leo and civilians. Ever a supporter of the Michigan economy, the hunting sports and the 2nd amendment.
@248Shooter
Previous Practice That Hurts
Next Don’t Bring a Knife to a Gunfight