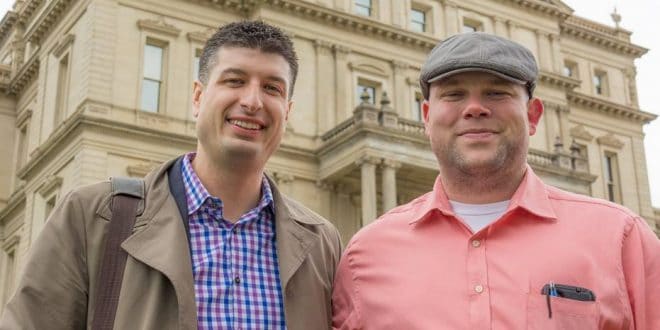 Today several of the 248Shooter crew made it out to the 2nd Amendment March at the State Capital Building in Lansing.  We were joined by roughly 200 other like minded people that included, fathers, mothers, grandparents, kids and all manner of responsible gun owners.

To the surprise of Mothers Demand Action who met at the capital the day before with 30 or so people nobody was shot, nobody was robbed, no crimes were committed and everyone left happy and maybe a bit cold.

It was great to see so many people in a time when gun rights are not on the forefront of our minds the same way they were in 2013 after Sandy Hook. The loss of support on this event from MCRGO was felt though not to the degree that some might have expected.  With outside pressure mounting it would be ideal if the riff of these organisations could be put to bed in an effort to pursue a common ground approach to securing the protection and expansion of State gun rights.

The afternoon started off with a welcoming and an introductory talk by Trek of MDFI who spoke about the importance of the constitution. Like the article run by Dan of MOC earlier this week, Trek took the change the narrative message another step. As American’s we need to fight for the entirety of the Constitution and not just the 2nd Amendment. Instead of dividing ourselves as American Gun Owners we need to establish our group as Americans who own guns. While that may sound like semantics it builds a foundation for a stronger country and a large grass roots movement. No American wants to limit free speech or allow illegal search and seizure.  To support the 1st and 4th amendments is not looked at as radical as they have a larger base of society the backs those beliefs. If we transition from a focus on being “Gun Owners” vs “Responsible Americans” we change the narrative and create a belief in protecting our existing laws.  While this is not the first time this idea has been brought up it is one that has not been focused on enough. I hope all those who heard his speech today take this to heart and apply it in their daily lives.

Trek was followed by Rene’ Hawarny of the Well Armed Woman who spoke about the growth in female shooters, the need for specialised gear and training for this market and the steps their group has taken to fulfil those needs. If you are a female shooter it would do you well to look into this group and try to associate with a local chapter.

Several of our State Representatives spoke about the work they are doing to ensure the clear message of the 2nd Amendment is upheld on a state level. It was good to see those who have actively backed the shooting community such as Representative Jim Runestad, District 44, Representative Lee Chatfield, District 107 and Senator Casperson, District 38.

Charles is the editor and lead writer for 248 Shooter, a Michigan based gun, news and gear review site. An avid student, taking classes from top tier trainers around the country. Charles is not LEO, Military or Invested in the companies he reviews. The goal of all articles is to show an gun fan enthusiasts opinions on popular products in the market. The opinions expressed are individual opinions that we hope you enjoy reading and offer a unique user perspective that may be of assistance. Charles shares his love for training as well as experience and opinions on some of the most talked about gear and products used by competitive shooters, military, leo and civilians. Ever a supporter of the Michigan economy, the hunting sports and the 2nd amendment.
@248Shooter
Previous Changing the Narrative Of Gun Rights
Next BUILDING THE FIGHTING MINDSET