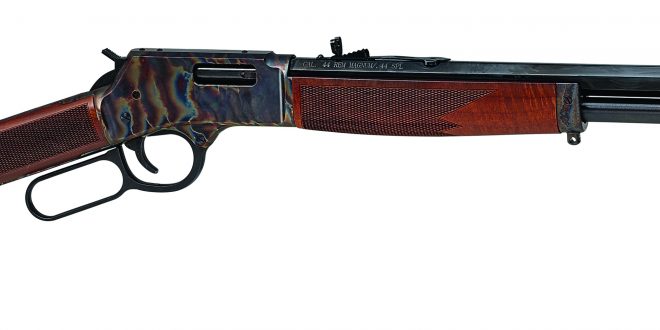 BAYONNE, NJ – January 18, 2017 – Henry Repeating Arms, one of the leading firearms manufacturers in the United States introduced over two dozen new models in 2017, including shotguns for the first time in the company’s 20-year history. The offerings are expanding again in early 2018 to include a new tribute edition, an additional finish option for the popular Big Boy line of lever action rifles, and an emergency preparedness kit that includes the U.S. Survival AR-7 rifle, among others.

Spurred on by the popularity of the .30-30 and .45-70 Color Case Hardened lever action rifles introduced in 2016 Henry is adding six more guns with the same finish for 2018. Color case hardening is a time-honored technique that results in harder surface areas of the treated steel, and the waves of deep color make it easily recognizable. The receiver and forend cap both get this color case hardening treatment, while the barrel, lever, and trigger have a blued finish. The top of the receiver is drilled and tapped for use with optics, and the rifle comes standard with fully adjustable semi-buckhorn rear sighs and a brass bead front sight. The barrel is Henry’s iconic octagonal blued steel barrel, and it is available in either a full-length 20-inch rifle version or a 16.5-inch carbine version. Besides the reduced overall length, weight and capacity the carbine version features one other difference with the large loop lever installed from the factory. Shooters value the aesthetics of the large loop lever, but it also plays a more practical role in cold weather when a smaller lever might not fit gloved fingers comfortably. The straight grip American Walnut stocks come pre-drilled with swivel studs for use with a sling, and the wood is deeply checkered to get a more confident grip on the gun. The Big Boy Color Case Hardened rifles and carbines are available in .44 Magnum/.44 Special, .45 Colt, and .357 Magnum/.38 Special. These caliber options make this model a strong pairing with a centerfire revolver of the same caliber. The tube magazine under the barrel can hold ten rounds of ammunition in the rifle version, or seven rounds in the carbine version. All variations of the Big Boy Color Case Hardened models share an MSRP of $1,045. For more information visit: https://www.henryusa.com/rifles/big-boy-color-case-hardened/

The U.S. Survival AR-7 is consistently one of Henry’s top sellers. Famed firearms designer Eugene Stoner invented the rifle, who is most well-known for creating the AR-15, which saw service with the U.S. military as the M16. The manufacturing rights for the AR-7 were passed to Henry Repeating Arms in 1997 when they made several changes to improve reliability, accuracy, and durability. Once used as an emergency backup firearm by U.S. Air Force pilots the rifle is now a top choice for recreational users, backpackers, emergency preppers and survivalists in need of a utility takedown rifle. For 2018, the brand new U.S. Survival Pack revolves around the 3.5-pound rifle that breaks down for carrying into its 16.5-inch stock. The kit includes a myriad of American-made items to aid with survival and emergency preparedness, which can all be packed up into the custom case made by Allen along with the stowed rifle and spare magazines. Among the items included in the kit are 100 feet of MIL-C-5040H Type III green paracord, which can serve as lashing or fishing line, a Mylar emergency space blanket to reduce heat loss in the body, and a black rubber SWAT-T tourniquet for emergency first aid. The fire steel, made by ESEE from 1095 carbon steel is used with ferrocerium rods or true flint, and a divot in the center assists fire starting with a bow drill. An ultralight Frontier Filter Straw is also included in the kit for water filtration. The filter is certified to EPA standards for the removal of Cryptosporidium and Giardia, as well as reducing chlorine and other chemicals. Datrex emergency food bars are shelf-stable for up to 5 years and come vacuum-sealed in a specially designed polymer-foil package. Four of these bars are included in the kit for a total of 1,000 calories. To help with skinning an animal for additional food, or for whittling roasting sticks or kindling, the kit comes with a Buck Rival folding knife featuring a 2.75-inch stainless steel blade, black nylon handle, and one-handed thumb stud opening. The Henry U.S. Survival Pack, model #H002BSGB has an MSRP of $550 and must be purchased from a licensed firearms dealer. For more information visit: https://www.henryusa.com/rifles/henry-u-s-survival-pack/

The new Shriners Tribute Edition, actually announced in late December, recognizes the Shriners International fraternity with a rifle built on the award-winning Golden Boy platform. Henry Repeating Arms is donating a portion of each sale to the organization to assist with their many philanthropic efforts. Serial #1, presented to the Shriners at their headquarters in Tampa, Florida on December 13th, 2017, is now housed in their memorabilia room. The Shriners Tribute Edition, model #H004SHR has an MSRP of $1,213.

Henry rifles can be purchased through a licensed firearms dealer. Most dealers offer a discount off of the MSRP.
For more information about the company and its products visit henryusa.com or call 866-200-2354.

Henry Repeating Arms is one of the leading firearms manufacturers in the country and the leading lever action manufacturer. Their company motto is ‘Made In America Or Not Made At All,’ and their products come with a lifetime guarantee backed by award-winning customer service. The original Henry rifle played a significant role in the frontier days of the American West and is one of the most legendary, respected and sought-after rifles in the history of firearms. The company’s manufacturing facilities are in Bayonne, NJ and Rice Lake, WI.

Keith is the Editor-in-Chief of GAT Marketing editor@gatdaily.com A USMC Infantry Veteran and Small Arms and Artillery Technician, Keith covers the evolving training and technology from across the shooting industry. A Certified Instructor since 2009 he has taught concealed weapons courses in the West Michigan area in the years since and continues to pursue training and teaching opportunities as they arise.
Previous Franklin Armory’s NEW BFSIII™ for ACR and B&T
Next From The Range at SHOT Show 2018: EOTech VUDU 5-25x Prototypes and Green HWS 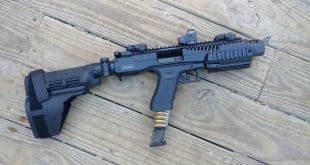 From Travis Pike The idea of a truck gun is nothing new. It’s a gun …