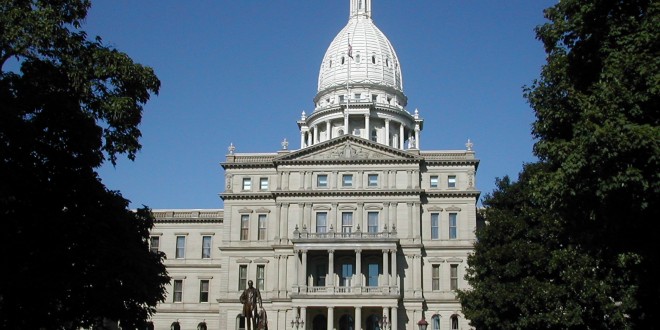 Rep. Triston Cole (R) of the 105th District recently introduced House Bill 5547. This bill is what many in the community refer to as a “parking lot bill” – a bill intended to prevent businesses from prohibiting the storage of firearms in vehicles that are parked in their lots.

Subsection (2) of the bill pretty well sums things up:

“A person, business, commercial enterprise, employer, or state service agency shall not prohibit an individual who lawfully possesses a firearm from transporting or storing the firearm or ammunition in a locked and privately owned or operated motor vehicle that is parked in a parking lot, parking garage, area designed for parking vehicles, or area used to transfer, hold, or load goods and services…”

The rest of the bill goes on to deal with what happens if subsection (2) is not followed. Some of the provisions included are:

The bill also specifies that it does not apply to any entity that would be required to violate another state or federal law in order to comply with the new provisions in the bill.

Not everyone is lining up to support

While “pro-gun” bills are generally well received by the firearms community, at least the ones that are well written, bills like HB 5574 are another story. To be clear, it seems no one disagrees with the “pro-gun” label, but rather whether or not bills like this are the right way to advance the cause.

It just so happens that two individuals from Michigan Open Carry, Inc.’s Legislative Team hold diametrically differing views on HB 5574, which makes them great to help detail the arguments for and against.

The following is intended to outline points for and against, rather than to advocate any stance.

Allowing law-abiding gun owners to at least keep their firearms out-of-sight in a locked vehicle they own, does more than prevent them from being dangerously disarmed even after they leave the property.

The gun prohibitionists know that in order to make a society turn against the principles of bearing arms and self defense, they must simply reduce the number of gun owners. This is why in many states where the gun prohibitionists haven’t been successful, they have tried to make gun ownership socially unacceptable and have pressured businesses, and even homeowners associations, to prohibit firearms.

Some of those who oppose this bill describe themselves as “Constitutionalists”, yet the constitution also authorizes aggression, including but not limited to taxes, martial law, etc. So unless a person is a voluntarist or an anarchists, to say that this bill is aggression against a business owner while at the same time holding the constitution in high regard, requires a bit of cognitive dissonance.  Simply put, the constitution itself is an act of aggression as it already greatly restricts property rights.

Some may say this bill infringes on private property or places an “undue burden” on the owner; however, that’s not the case according to the courts. Rational Basis is the standard that is used for commercial activity in most cases, and people having access to tools of self defense meets this standard. This is why the government already has restrictions on “private property” that include, race, religion, sexual preference, disabilities, labor standards, collective bargaining, and dozens more. Further, no action is required on the part of a business owner, they can simply not search anyone’s car. In fact, employers almost never search a car of an employee, unless they think they have a firearm in the vehicle.

Simply put, if the gun prohibitionists can’t get their way at the legislature, then making as many gun owners jobless and homeless as possible is an acceptable alternative in the meantime. Yes, the anti-rights crowd has no problem ruining the lives of you and your children, consider yourselves collateral damage. They can’t care less about private property, they already want to confiscate your property. They didn’t suddenly gain principles in a parking lot, so do not be fooled.

This bill is reasonable. It helps create an environment to protect our rights and ensure safety, just as the Constitution is viewed as reasonable and unquestionable by “Constitutionalists” even though it greatly restricts private property with taxation, eminent domain.

While bills like HB 5574 may provide practical benefits to some gun owners, supporting such a bill will result in the loss of a moral “high ground” that we’ve relied on previously, again and again, to fend off the anti-gun bigots.

The ability to defend oneself is most certainly a core element of liberty. However, so is the ability to regulate your property as you see fit, whether it’s your house, or in this case, the property of a business you may own. As the saying (as cliche as it may be) goes: “Your rights end where another’s begin”.

Morally, a person or private entity should have every right to dictate the terms for being on property they own, whether it’s a building or a parking lot. Let me be clear: A non-owner has absolutely no inherent right to be on someone else’s property – regardless if it’s owned by a private individual or a company (which, of course, are owned by private individuals). To abridge the terms and conditions that a private property owner can specify is completely antithetical to the concept of liberty, a core tenant of the pro-gun movement.

While some may say proposals such as HB 5574 are no different than a slew of ways the state already regulates private property, while true, using the state as a metric for morality is always a bad choice. If we go down this road, wouldn’t then our country’s history of gun control be a devastating tool to be used against us.

Others may bring up “public accommodation” – as though the general acceptance of the public should hold a private property owner to a different standard than what they can get away with for their personal residence. This concept is flawed because, for the purposes of HB 5574, there is no difference if you run a business out of your home. There is nothing in the bill which specifies it only affects these “public accommodations”. So if you run a business out of your house, you’re still subject to the same requirements as a mall.

Public buildings or property, on the other hand, should respect the rights of the people they serve. If this bill only affected state agencies, none of the above would apply. That said, private property owners should be able to dictate the terms for which you can utilize their property.

Let the anti-gun bigots out themselves, so we know where not to go.

I want to thank Tom Lambert of MOC for the synopsis here and the gathering of these conflicted viewpoints from Jared Coyne and Jason Gillman Jr. As a gun owner and business owner, I have never been more torn on a bill that was Pro-Gun. We have kept comments turned off on all our articles due to spam and infighting. I encourage all of you to share this article on your social media pages and open further discussion or join us on https://www.facebook.com/248Shooter/ to discuss this bill further. I am really interested in hearing the opinions of those affected.

Tom is the President and Legislative Director for Michigan Open Carry, Inc., and an NRA Certified Instructor. Michigan Open Carry, Inc. is the premier organization in Michigan promoting the lawful open carry of a holstered handgun. Through positive ambassadorship with open carry, MOC seeks to enhance all gun rights related to carry for self-defense for everyone.
Previous Vanquest Envoy 3 Review – Making a Great Bag Better
Next Guns by the Numbers, not Mythology